Josh Cobb was the original tenor singer for Legacy Five from 1999-2000. He won the Horizon Individual award at the Singing News Fan Awards. He was with the Legacy Five for less than a year when they parted ways and he went into secular music. He was replaced by Tony Jarman. Josh returned to Southern Gospel as the tenor singer for Gold City from 2009-2010, then spent 2019-2021 with Dailey & Vincent, which is also the current group for former Anchormen/Palmetto State Quartet/Gold City bass Aaron McCune. 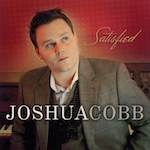 hi-res
2010 Satisfied (Custom Records): It Is Well; Calvary's Love; More Than You'll Ever Know; I Believe In A Hill Called Mount Calvary; Satisfied, (the Crystal Fountain Medley); The Solid Rock; The Broken Vessel; How Big Is God; He Looked Beyond My Faults; Eternal Life.
All articles are the property of SGHistory.com and should not be copied, stored or reproduced by any means without the express written permission of the editors of SGHistory.com.
Wikipedia contributors, this particularly includes you. Please do not copy our work and present it as your own.