The Morris Trio was first known as Master's Voice. They formed in 1997 and were based out of Laurel, Mississippi. Master's Voice moved to Aiken, South Carolina in 1999 where they became a trio after Tim Duncan and Josh Garner left the group. 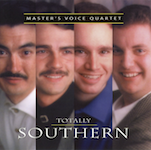 hi-res
1999 Totally Southern (HeavenSong Records/914 339 822-2): Somebody Run; Sittin' Round The Table; There's A Cross In The Way; All I Know; Lord, Lead Me Home; I Know Jesus Will Always Be There; He's Already On His Way; Old Time Christian Way; Only A Few At The Cross; He Is Leading The Way (Lenwood Morris, Josh Garner, Tim Shelby (Chris Davis is on the cover, but Tim Shelby is on the recording), Tim Duncan).

Thanks to Lenwood Morris for his contribution.